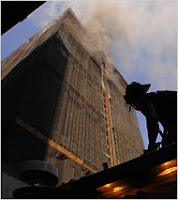 The snakebit Deutsche Bank building continues to claim lives. Two firefighters who were trying to put out a stubborn fire that started late yesterday and involved 10 floors of the building were killed when they became trapped in a maze of construction materials and their air supply ran out. Robert Beddia, 53, and Joseph Graffagnino, 33, were killed. My thoughts and prayers go out to their families, friends, and fellow firefighters.

The building, at 130 Liberty Street, had stood as a ghost since parts of the twin towers crashed into it, leaving it severely damaged and filled with toxic debris, including asbestos, dioxin, lead and chromium. For residents nearby, the acrid smoke brought back memories of the grim dust clouds that lingered after the attacks.

The demolition work created difficulties for firefighters trying to reach and put out the blaze, which started on the 17th floor, allowing the fire to mushroom out of control, fire officials said. The building did not have a working standpipe, which runs through high-rise buildings to provide a source of water for firefighters.

It was “a truly difficult fire,” Fire Commissioner Nicholas Scoppetta said. “We had to lift lines from the street, with ropes in order to get it up to the 17th floor.”

Mayor Michael R. Bloomberg said the building was structurally sound and not in danger of collapsing. He also said preliminary air-quality tests showed an increase in particulate matter but no hazardous contaminants, though he warned that results of more complete tests would not be available until this morning.

“Air quality and the environmental impact, as you might imagine, are a top concern to us and we are monitoring the situation very closely,” the mayor said at a news conference last night.

All civilians working in the building got out unharmed when the fire was reported at 3:36 p.m. There were no evacuations of adjacent buildings, the mayor said.

Mary Costello, a spokeswoman for Bovis Lend Lease, the construction company in charge of the building’s dismantling, deferred all comments to the Fire Department.

The cause of the fire was under investigation, though officials ruled out acetylene torches, which were not in use Saturday by workers dismantling the building. Investigators are looking into whether the fire was started by a worker smoking, an official said.

The two firefighters became trapped in the building and died of what appeared to be cardiac arrest resulting from exposure to carbon monoxide, Mr. Bloomberg said. They were Joseph Graffagnino, 33, of Brooklyn, who had been with the department for eight years, and Robert Beddia, 53, of Staten Island. An official said he had been with the fire department 23 years and was the senior firefighter on the scene. They were taken to NYU Downtown Hospital, where they died.

Expect investigations to focus on the standpipe access and usability during the deconstruction efforts and whether new guidelines and rules may need to be put in place to ensure that those systems operate throughout the construction and deconstruction process.

Inspectors are looking at whether a discarded cigarette may have touched off the fire among combustible materials being used in the deconstruction process.

Many people living in Battery Park City and nearby residential buildings thought back to the awful day on 9/11/2001 when the overpowering smoke filled Lower Manhattan and the smells brought back a powerful reminder of that day. City health officials have said that the air quality monitors did not find any releases of harmful materials. A few people weren't taking any chances and were wearing fabric face masks to try and block the smell, though I doubt that those kinds of masks would do anything to block out harmful particles if any had indeed been released.