No one needs reminding that today is the 10th anniversary of the day all our worlds changed forever. 10 years ago today, 19 murderers killed 2,996 innocent men, women and children, in the name or religious fanaticism. Several years ago I participated one of the most stunning tributes I have seen, Project 2,996. Previously, I have remembered: Capt. Patrick J, Brown, Hagay Shefi, Alison Marie Wildman, Daniel Thomas Afflitto, and Donna Bernaerts-Kearns. I tried to write this tribute several times in the last few days, but could not. This year was harder than in years past. The 10th anniversary shook me hard. It actually wasn't until I was listening to the names being read out this morning and I heard the name Daniel Thomas Afflitto and then heard Donna Bernaerts called out, that I turned to my wife, grabbed the computer and showed her (again) the tributes. I knew I had to do another one this year. So, this one is coming a bit later in the day as I had plans this morning. But today, I remember Mark Francis Broderick. 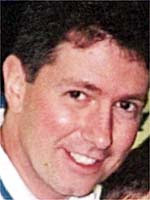 Mark, nicknamed Sparky (because he was famous for taking his time), and Disco Danny b his family, turned 40 years old just days before 9/11. He had three sons, Matthew 7, Andrew 3, and James, 16 months, which from all accounts, he thought the world revolved around. In fact, instead of a birthday party, he told his wife, Carolina, that he wanted a family trip to Hershey Park in Pennsylvania. Mark was known to spend weekends with the kids, as he was often busy at work during the weekend. In his eulogy, his fraternity brother and friend, Chris Dowd, asked "How many of us can remember him standing, smiling, with one or more of his kids hanging from his neck?" What greater memory of a person can one have?

Originally from Bayonne, Mark swam at the YMCA, coached by his father. He attended St. John's University on Staten Island. Mark and Carolina met while working for financial firms in Manhattan, and were in the financial district when the WTC was attacked in 1993.

Mark lived in Old Bridge, NJ, just one town north of where I live. I recently took my two kids, similar in age to Mark's middle and youngest sons, to Hershey Park too. Its thinking about people like Mark, and thinking about how his three children will not grow up with their father, that makes this day hard. Its why I had to make plans to leave the house today as I could not watch the coverage of the memorial ceremony for very long.
Posted by Legalbgl at 9/11/2011 05:20:00 PM