In To The Breach: D-Day 64 Years Later

June 6, 1944 - a day that changed the course of the war in Europe, and set the United States on a course with destiny as the defender of freedom. It wasn't guaranteed, and Gen. Dwight D. Eisenhower had written two versions of a statement on what happened this fateful day 63 years ago - one if the landings succeeded and another if the landings failed. The version for if the landings failed read:

Our landings have failed to gain a satisfactory foothold and I have withdrawn the troops.

"My decision to attack at this time and place was based on the best information available.

"The troops, the air and the Navy did all that bravery and devotion to duty could do.

"If any blame or fault attaches to the attempt it is mine alone."

Thankfully for all involved, Eisenhower would never have to give that version. 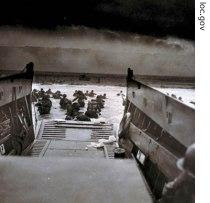 That's the view that many young men saw as they waded ashore under murderous German gunfire. For many, it was the last thing they saw. For the survivors, it was just the first step of many such steps into freeing Western Europe from the murderous grip of the Germans.

63 years ago, elements of the American, British and Canadian forces landed in France, opening up the Western Front against Nazi Germany. It was D-Day for Operation Overlord - the invasion to liberate Europe from the Nazis:

A great invasion force stood off the Normandy coast of France as dawn broke on 6 June 1944: 9 battleships, 23 cruisers, 104 destroyers, and 71 large landing craft of various descriptions as well as troop transports, mine sweepers, and merchantmen—in all, nearly 5,000 ships of every type, the largest armada ever assembled. The naval bombardment that began at 0550 that morning detonated large minefields along the shoreline and destroyed a number of the enemy’s defensive positions. To one correspondent, reporting from the deck of the cruiser HMS Hillary, it sounded like “the rhythmic beating of a gigantic drum” all along the coast. In the hours following the bombardment, more than 100,000 fighting men swept ashore to begin one of the epic assaults of history, a “mighty endeavor,” as President Franklin D. Roosevelt described it to the American people, “to preserve … our civilization and to set free a suffering humanity.”

The attack had been long in coming. From the moment British forces had been forced to withdraw from France in 1940 in the face of an overwhelming German onslaught, planners had plotted a return to the Continent. Only in that way would the Allies be able to confront the enemy’s power on the ground, liberate northwestern Europe, and put an end to the Nazi regime.

The outcome of the landings was in doubt until the beachheads were able to be established and reinforcements could be landed.

While the landings at Sword, Juno, Utah, and Gold beaches were largely successful, Omaha Beach nearly became a fiasco of monumental proportions that could threaten the landings at the other beaches. The Sherman DD tanks were launched too far out in the choppy waters and 27 of the 32 tanks sank, leaving the infantry without the needed support. German forces were able to pin the troops that did make it ashore in a killing field that turned the ocean red.

The military briefly considered shifting assets from Omaha Beach to Utah in order to exploit the landing there, but the survivors at Omaha managed to open up pathways to behind the German lines, where they could be attacked, cut off and destroyed by follow up attacks.

In the hours and days after the landings, tens of thousands of Allied troops would come ashore and link up with the remnants of the Airborne units that landed inland to help prevent reinforcements from heading to the beaches. Those units suffered serious casualties for several reasons including being dropped immediately on top of St. Mere Egliese, flooded fields, and were dispersed over such a wide area that it made it difficult to link up the individual Airborne units.

The following is a special video that includes footage recreating the events of the fateful hours of D-Day:

Eisenhower's speech as it was delivered.

Slublog posting at Ace in 2007 had a good posting on the events of D-Day, including a link to the opening scene from Saving Private Ryan (very violent). As violent as that scene was, the reality was so many times worse. Dave in Texas also had a very thoughtful posting.

Also, recall last year's spoof of how the modern media would cover the invasion had it occurred today: