Good News for the Great Falls 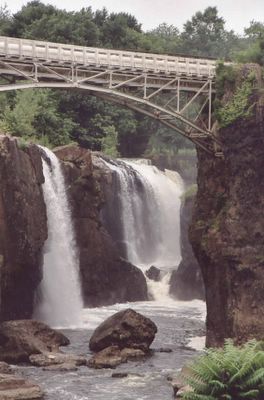 The Great Falls State Park will take shape, thanks to the selection of a master plan that will revitalize the area, which formed the heart of the American Industrial Revolution before fading into the shadows of post-industrial decay and blight.

The competition winner, Field Operations of New York City, proposed a plan called "Paterson's New Outdoor Living Room," allowing residents to walk along the river, under the shade of its cliffs and up to the foot of the falls. The $10 million vision for the project's first phase centers on using a loop path to tie the park's various elements together -- linking the falls and Overlook Park to the ATP site, which would be restored as a landscaped path, the Valley of the Rocks and Mary Ellen Kramer Park.

"This could be a world-class park," said Ellen Neises , senior associate for Field Operations, the urban design firm.

When the project is complete, it will cost upwards of $100 million, according to state Department of Environmental Protection Deputy Commissioner John S. Watson, who accompanied Gov. John S. Corzine to the event. U.S. Sen. Frank Lautenburg, D-N.J., a Paterson native, also participated.

I doubt that many residents in the area even know about this hidden gem, which is a shame considering that the falls could become a significant tourist destination and help preserve a bit of nature in the heart of a heavily populated area of Passaic County.
Posted by lawhawk at 11/22/2006 12:17:00 PM