So many folks around the world and blogosphere accept as truth the fact that Israel is indiscrimantly killing Lebanese, and that the overwhelming number of people killed in Lebanon are civilians.

Au contraire. That is not the case as these photos show. 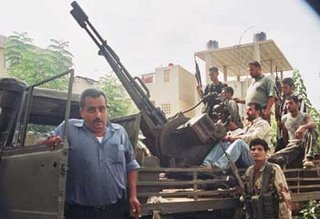 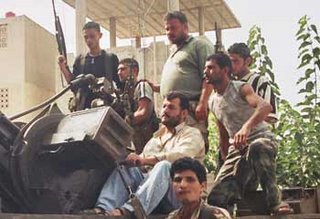 What do these photos show? When you look at their attire, you notice a couple of things. One isn't their sartorial splendor. It's that they look like anyone else in Lebanon. They blend in perfectly with anyone else walking around in that neighborhood, so if Israelis hit this particular heavy weapons position, the news report will claim that there were only seven or eight civilians hit - on the basis of the appearance of the clothes. The facts are substantially different. It would show that seven or eight Hizbullah terrorists were eliminated in a raid that successfully took out a heavy weapons position.

They show Hizbullah terrorists operating a heavy caliber machine gun in the middle of a densly populated area. Let's not forget that Hizbullah has had six years to prepare for this conflict, and knows the terrain well, and blends in perfectly with the civilian population, so that accurate counts of civilian casualties is simply impossible.

Plenty of other people are taking note of these photos, including Michelle Malkin, Charles at LGF, Wizbang, Ed Morrissey, Atlas Shrugs, The Volokh Conspiracy, Jonah Goldberg at NRO, All Things Beautiful, AJ Strata, and Ranting Profs.

UPDATE:
In Search of Utopia takes exception with my commentary on the Qana attack. That's his right of course. But lets examine his claims a wee bit more closely, shall we?

Okay, now someone want to explain to me how clothes would survice and huge weapon systems would be obliterated from the scene?

Hmm, if someone is manning that particular heavy machine gun, are they wearing a uniform or not? They aren't. That gun can shoot down Israeli helicopters or aircraft. Should Israel refrain from hitting it because the people manning it aren't dressed in uniforms?

If the airstrike hits, and the position is obliterated, those folks on board that gun platform are going to be scattered about. Who is going to arrive on the scene to figure out what happened? Hizbullah or Israeli forces? Hmmm, this is happening in areas that Hizbullah controls, so they'll determine who counts as a casualty and who is a civilian. We're already seeing elsewhere that Hizbullah is controlling the casualty counts coming out of South Lebanon.

These arguments border on ridiculous. The Israelis blew up some children. Did they do it deliberately? I am certain they did not, but all this bullshit justifying it is turning my stomach. It's a war, in war mistakes are made. ON BOTH SIDES. The true test of morality is whether one accepts their mistakes, makes ammends for them and makes every effort NOT to repeat them. This justification of Israeli carelessness does nothing to encourage that morality.

Hmmm, mistakes were made on both side? What mistakes were made by Hizbullah? They purposefully operate in and among civilians, dress as civilians, and purposefully put civilians in harms way as human shields. They purposefully target Israeli civilians. Hizbullah exploits the West's inability to deal with existential threats for what they are. Hizbullah places weapons caches in locations it knows that the West is reluctant to attack for fear of imposing civilian casualties. So far, the only mistake made by Hizbullah is that they didn't expect as forceful a response as they received thus far.

On Israel's side, they're making all the apologies, for whatever it's worth - and it isn't much. The EU and UN made up their minds that Israel is in the wrong, and that it must cease and desist. No mention of forcing Hizbullah to stop, and that's because no one can make them stop except Israel or Syria and Iran, and Syria and Iran have no interest in doing so.

Israel is suppossed to be BETTER than Hezbollah...

Israel is supposed to eliminate Hizbullah, not accomodate Hizbullah and accept a situation where Israel continues to be hit on a daily basis by hundreds of rockets, all fired from positions that are designed to put civilians, including Lebanese women and children in harms way.

All these victims in Lebanon are on Hizbullah's shoulders - they began this latest round of fighting, continue to fight to maximize civilian casualties in both their attack and placement of rockets, and we even see how Hizbullah purposefully put ammo bunkers under schools for precisely that purpose. By the formulation that In Search of Utopia proposes, Israel would have no choice but to accept these attacks, because civilian casualties will continue until the rockets run out. And given that Israel couldn't interdict those supplies coming across the Syria/Lebanon border, Israel will become a bloody mess before long.

Indeed even the UN recognized that Hizbullah was purposefully operating in civilian areas to maximize civilian casualties. The burden is not on Israel to defend itself from the terrorists. If you want to direct your ire at someone, do so at the Hizbullah terrorists and their terror masters in Damascus and Tehran.