al Qaeda wants to take the credit for a botched attack on US Navy vessels in the Jordanian port of Aqaba. None of the missiles or mortars (no one in the media is quite sure what was fired - and don't count on the media to accurately present that information) hit the US ships, but the fire did kill a Jordanian soldier and wound another when the attack overshot the target. This report calls them Katyusha rockets, which was the weapon of choice of the Palestinian terrorists, not al Qaeda, who preferred using suicide bombers. This is a downscale attack for them. It may have been an attack of opportunity with limited resources instead of a planned mass attack.

What does this say about the state of al Qaeda? That they're trying real hard to make every terrorist act, whether actually conducted by them or not, seem to be an al Qaeda attack? That's possible.

Are they hoping to get lucky on attacks that would score a media frenzy? Absolutely. Showing a US ship damaged by missile or mortar fire would be shown to be a defeat for the US, regardless of any actual damage to the ship or whether any US sailors or Marines were casualties.

And how will al Qaeda spin this failed attack? I think the better question will be "how is the media going to spin this attack?"

UPDATE:
One of those missiles landed in Eilat, Israel. 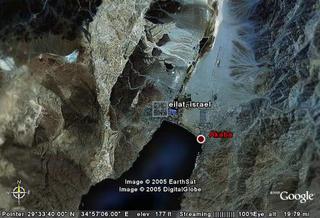 That's a map of the region. It shows both the port of Eilat and Aqaba. That's quite a CEP they have with those missiles to be off by that much. 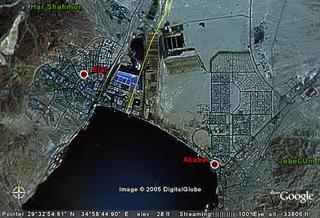 This map is slightly clearer and shows the border between Israel and Jordan (yellow line). However, it doesn't have a scale to put the distances involved into perspective. Sorry, but I'm limited with the tools at my disposal. Other people have commented that the distance involved is quite small, so the distances aren't nearly as great as the map would indicate. If anyone wants to take a stab at the scale involved, be my guest and leave the distance information in my comments section. The height of the image was 33,806 feet.

UPDATE III:
Is there more than can be said about the failed attack? I think so. Is it possible that the one missile that landed in Eilat was not a miss, but rather a deliberate attempt at hitting the Eilat airport, which is near where the rocket landed.

We have al Qaeda trying to show that it can flex its muscles. It tried to attack US warships. That's crazy stupid, but then again al Qaeda isn't exactly short on people willing to be crazy stupid.

I believe that this is yet another sign that they're continuing to probe our defenses and see what they can get away with. The devil is in the details of whatever response will be mounted in return.

One other thing - what separates this attack from the Cole attack? The only thing separating this from the Cole was that this was not a successful attack. That's troubling. Al Qaeda still thinks, or wants people to think, that it can go toe-to-toe with the US.

UPDATE III:
Bubbleheads have more background on the naval units involved in the attack earlier today.
Posted by lawhawk at 8/19/2005 10:41:00 AM

Labels: Al Qaeda, Israel, US Marines, US Navy
Email ThisBlogThis!Share to TwitterShare to FacebookShare to Pinterest